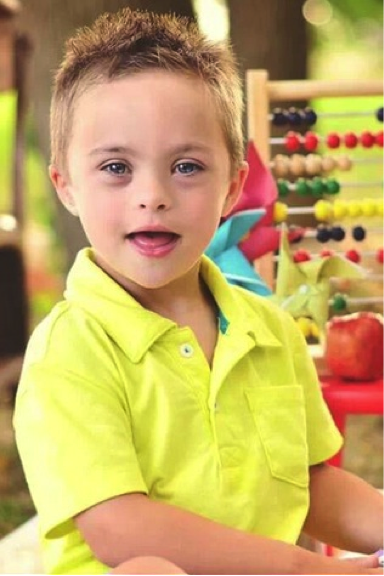 Our Riley Kid of the Week for this week is Maison Kurmay! Maison and his family are very involved with PUDM and Maison absolutely loves to dance. He also just graduated from kindergarten this year and we are so incredibly proud of him! His story is told below by his mom, who is also a Riley kid.

We found out we were pregnant with Maison at Makenna’s 1st birthday party (Maison’s younger sister, who is a Riley kid as well). We were very excited and very scared. Because Maison’s sister was born so premature (3 months early), I was followed very closely.

At 13 weeks I had a detailed ultrasound, which raised some flags to our specialist. At 17 weeks we had an amniocentesis and at 19 weeks we were told that Maison had Down syndrome and an inversion in his number 2 chromosomes. What this meant was that his number 2 chromosomes had split in half, flipped, and then re-fused back together. The doctors had no idea what this would mean and warned us that Maison could spontaneously abort at anytime during the pregnancy.

We were hopeful he would make it to term and be born healthy and thankfully he was! He was born on time and weighed 5 pounds and 15 ounces. Maison was treated at the special care nursery at University Hospital connected to Riley due to his low heart rate and oxygen needs. Over the next few months Maison underwent sleep studies and his oxygen was monitored closely.

After a few months he came off the oxygen and was very healthy. We have been so lucky with his health and feel very blessed. Maison is full of energy and has a personality that glows!

We can’t wait to have Maison back at Purdue in November at our marathon and are so excited to see his newest dance moves!