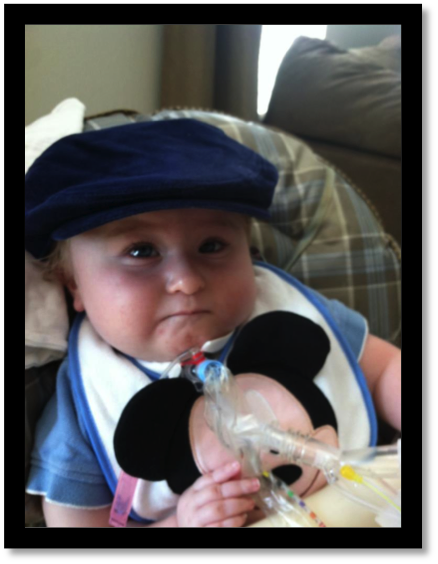 Our Riley Kid of the Week for this week is Anders Maresh! The Maresh family is very involved with PUDM and we love seeing them at events! Their whole family is so much fun. Anders is currently 2 years old and his story is told below by his mother.

Anders was born on October 27, 2011 and was a very easy going baby. One day, after Anders woke up from a nap, he was having some trouble breathing. We took him to IU Health Arnett where he was admitted to the Riley NICU unit where he stayed for a week and was treated for the metapneumo virus. At Anders’ 6 month appointment, his pediatrician suggested we see a Developmental Pediatrician at Riley since Anders was still having muscle control issues. At the appointment, we were told that Anders has a severe case of hypotonia, which is low muscle tone. The doctors said they needed to do further tests and an MRI to identify the underlying cause.

Anders had his MRI on July 7th and the results indicated that everything looked good with a few minor issues that neurology needed to review. The doctor said his brain was healthy. Now, we just had to wait on his blood work. Later in July, we noticed that Anders wasn’t gaining weight. On July 23rd he was admitted to Riley for “Failure To Thrive” and had his first g-tube surgery. We were hopeful that he would now be getting the calories he needed to gain more energy and begin to grow. Unfortunately, Anders was soon admitted back to Riley with pneumonia.

On Labor Day weekend in 2012, Anders breathing became more and more labored. We decided to take him to the ER in Lafayette and they determined he needed to be taken to Riley right away. Upon arrival to the Riley ER, Anders had crashed but they were able to keep in stable with an ambu bag. This was when our 68 day stay at Riley began.

The next few days were full of x-rays, breathing treatments, and tests. Anders alternated between improving and taking a few steps backwards. We went through many ups and downs and our doctors finally determined that Anders had some type of Muscular Myopathy and there was a chance that with time Anders would improve. So, On September 27th, Anders had a tracheostomy, which put him on a ventilator.

The staff at Riley was top notch. They taught us everything we needed to know on how to care for Anders and supported us as we learned our new life roles with a child on life support. We met so many awesome families along our journey who we will always share a bond with.

We are so blessed to be able to have Anders at home. Since being home, Anders has made many return visits to Riley for doctor’s appointments and tests, but we have not had to have many more hospitals stays!

PUDM loves the Maresh family and we can’t wait to see them soon! A few members of our executive board have even had the chance to spend some time with this wonderful family this summer!