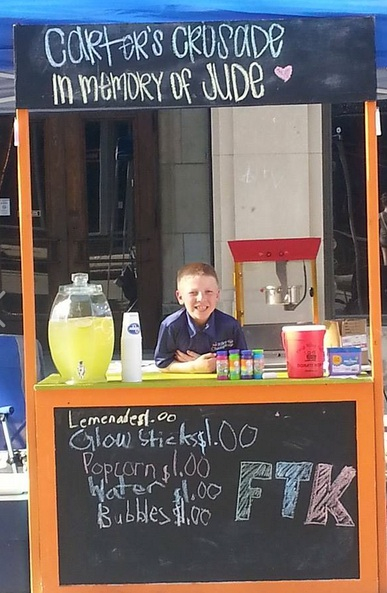 Our Riley Kid of the Week this week is Carter Swathwood! Carter is a PUDM rockstar and him and his entire family could not be more wonderful and inspiring to all of us. Carter was selected as a 2014 Riley Champion and has had an incredibly exciting year representing Riley. He was featured center court at a Pacer’s game, served as a coin toss kid at a Colts game, and had many other once in a lifetime opportunities. Carter and his family are always raising money for Riley and that is exactly what Carter is doing in the picture above! Carter’s story is told below by his mom.

On October 7, after dealing with a high fever and cough for a couple of days, we decided to take our 5-year-old son, Carter, to the doctor. Carter was given a breathing treatment and a few other tests. His doctor said that he knew before even doing the tests that he would be admitting Carter to the hospital. Carter tested positive for H1N1 and was having trouble breathing. His doctor was concerned that he may have a secondary bacterial pneumonia infection.

We made our way to Home Hospital on the East side of town. Over the next 12 hours, Carter’s condition quickly worsened. The doctor arrived at the hospital, did his exam, and informed us that the helicopter would be there in 20 minutes to transport Carter to Riley. The doctor was concerned that Carter would need to be intubated and need further assistance, and the hospitals in Lafayette were not equipped to handle severe situations like this.

Carter was flown to Riley on the helicopter and we immediately sped to the hospital to meet him. He had been admitted to the PICU and when we arrived he was very calm and had received many gifts! These included his very own fleece soccer blanket, a fire truck with lights and sirens, a ceramic pumpkin to paint, and much more!

Overall, our stay at Riley, although very scary, was a nice and successful stay! We are very grateful to everyone who had a part in Carter’s recovery and he is once again a healthy and thriving boy!

We would like to thank the Swathwood family for all that they do for PUDM and Riley! We hope your whole family is having a wonderful summer and we all look forward to seeing you soon!