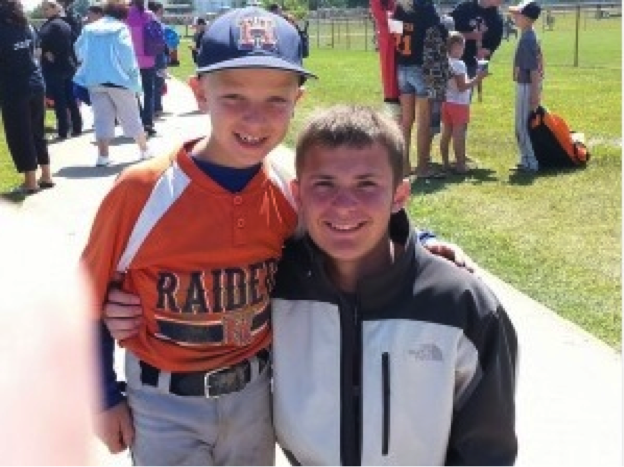 We are so excited to welcome yet another family to PUDM! This week we are introducing the Shumaker family and our Riley Kid of the Week is Dylan Shumaker! Dylan, as well as his three sisters have all been treated in some way at Riley. Dylan had the incredible opportunity to be a 2014 Riley Champion and is pictured above with Carter Swathwood, a fellow 2014 Riley Champion. Dylan’s story is told below.

In June 2012, Dylan was diagnosed with a spinal cord cancer called myxopapillary ependymoma, a tumor that arises from a tissue of the central nervous system. He underwent surgery at Riley Hospital For Children and had 33 proton radiation treatments, completing treatment in October 2012. Although he had to sit out wrestling last season, he stayed close to the mat, cheering on his teammates and earning the team’s Guts Award.

Dylan’s commitment to school and athetlics inspired everyone around him. Despite missing classes for six weekends, the junior was inducted into the National Honor Society and will graduate with his class. He was back on the baseball field last spring and this fall replaced football with soccer.

After his treatment, Dylan shared his Riley experiences at the March 2013 Bremen High School Dance Marathon. Supporting pediatric research is important to the Shumaker family. Given the unusual pattern of Dylan’s cancer, Riley oncologists asked his parents Mike and Kay to donate his surgically removed tumor to be banked for future studies. The family also participated in Plymouth, Indiana’s Relay for Life to benefit the American Cancer Society this summer, where Dylan lit the Flame of Hope and led the survivor walk.

Although Dylan is thrilled to get his old life back, he also knows that surviving cancer has changed him. “I’ve grown up a lot in the past year,” he explains. “I don’t get worried about the small stuff. I keep my eyes on the goals I have for myself.”

Once again, we are so excited to have the Shumaker’s join our PUDM family. We can’t wait to start seeing you all at events and get to know your family better!