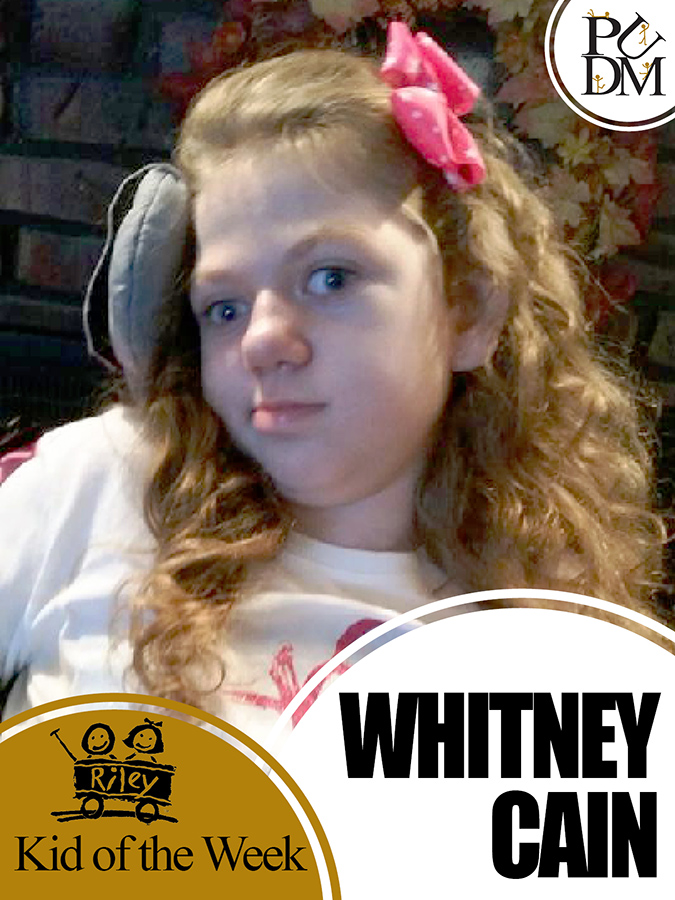 Whitney Cain was taken to Riley for the first time when she was a newborn, and today, she is there again fighting for her life. Here is her story:

At 4 days old Whitney was taken to the ER with a severe case of hiccups that would not stop. When we got to the hospital she was dusky and in distress and the doctors found her body temperature to be 94.0. Quickly the doctors life-lined Whitney to Riley where she was placed on an EEG which showed seizure activity. From this single moment we knew that our lives would be changed forever. Whitney was diagnosed with epilepsy and a potential mitochondrial disorder. Over the first few months she would experience seizures of up to 5 hours, and no medicine was able to calm the brain activity. At 5 months of age Whitney was flown to the Cleveland Clinic where she underwent a 48 hour EEG. What was supposed to be a 48 hour stay turned into 3 weeks of continuous monitoring due to the severity of the seizures. Yet the doctors still could not supply us with an answer.

At 11 months old doctors thought it was a good idea to do a muscle biopsy for the mitochondrial disease and they insert a Vagal Nerve Stimulator to try and help alleviate the seizures. A VNS essentially acts as a pacemaker for her brain. The muscle biopsy was so long that it took 6 months to get back the results, which came back positive. At this point doctors told us that Whitney had a multi-complex mitochondrial disorder affecting her respiratory, neurological and gastrointestinal systems, and that there was no cure. They told us her life expectancy was short.

Roughly two weeks ago on January 24th Whitney had to be life-lined to Riley for the 38th time. However, this time around doctors found a new diagnosis, dysautonomia. Dystautonomia is a failure of the autonomic nervous system, which controls majority of your involuntary body processes such as body temperature and heart rate.

“It is hard to watch your child suffer knowing there is nothing we can do to help. She is nonverbal, wheelchair bound and has a feeding tube for all her nutrition and medication needs. She is the light of our lives and has a 9 year old sister Hannah waiting on her at home. We never leave the bedside as she continues to fight for her life.” -Mrs. Cain

Below you will find a gofundme link. This will not be usual for Riley Kid of the Week but currently Whitney is fighting for her life and when I was showed this story it moved me. But more importantly it moved one of our amazing committee members to go start a link for support. If you feel compelled every little bit will help this family and show the amazing love that PUDMers have. Take a moment to think about why you dance.

We have personally seen how many miracles a single dollar at a time can make, please consider donating and helping the Cain family as they are fighting at Riley right now!