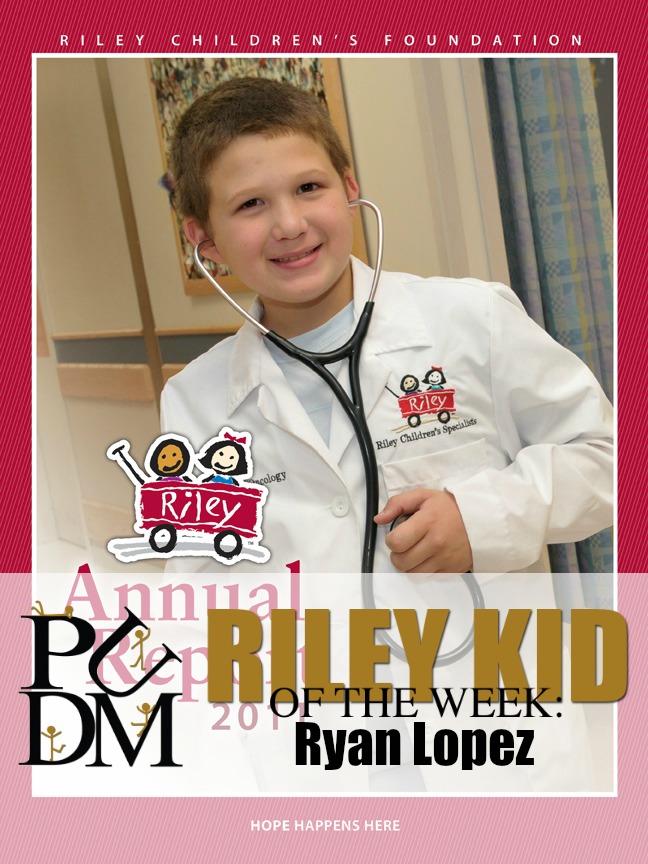 Ryan was diagnosed with (ALL) Acute Lymphoblastic Leukemia when he was 5 on April 7, 2008. This is his story.

Ryan was a typical 5 year old. He was in kindergarten and had his first T-ball practice on Wed April 2nd, 2008. He just didn’t seem as excited as we had expected. He didn’t keep up with the other kids. It was cold and we thought he was maybe coming down with something. Sure enough that Friday he came home from school with a fever and seemed to us to have the stomach flu. Ryan spent the weekend throwing up and feeling normal flu like symptoms; fever, body aches and weakness. Monday the 7th I stayed home from work to take him to the clinic because he was looking a little dehydrated and complaining that the backs of his knees were hurting to the point he didn’t want to walk. We got to the clinic and they took one look at him and said to take him to the emergency room because he probably needed IV fluids. Nothing I haven’t been thru before so off we went to the ER.

As they were asking me questions I had remembered a few weeks back he had complained of a headache so they sent us off for a CAT scan just to check it out. While there I had been asked by two nurses if I wanted to call someone to be here with me, which I didn’t think anything of at the time but looking back they must have already known I was in for a huge spiral downward! By the time we had gotten back from the scan there were 2 doctors and a nurse holding a box of tissue waiting for us and I knew something was up. At that point I just wanted to run the other way.

They sat me down and again asked if there was anyone they could call and that there was an ambulance on the way to take us to Riley because the preliminary tests shows Ryan possibly had Leukemia! That was something no parent could have ever prepared themselves for, to hear those word “Your Child Has Cancer.” His status from that point continued to spiral downward. He tested positive for a strep infection so they started IV antibiotics, and his Hemoglobin was extremely low, so they also started a blood transfusion. While in the ambulance on the way to Riley, he got a nose bleed that wouldn’t stop because he had little to no platelets and a head to toe rash that after days in isolation they figured it out to be septic emboli, which meant the infection was so bad it was seeping out through his pores causing little blisters all over his body, he was one very sick little boy.

Treatment for this type of leukemia for a boy at the time he was diagnosed was a long 3 ½ years. It involves various types of chemo administered through an IV in his “Port”, placed into his spine by a spinal tap, injections in his legs, as well many different kinds of pills he had to take nightly, weekly and monthly sometimes up to 18 pills at once. He had multiple procedures like spinal taps every 3 months, bone marrow aspirations to check for remission, and surgery to have a port a cath put in place. The “port” is a small catheter inserted into his artery and it is how they would access a vein not only to administer his IV chemo but also to draw his blood to check on how he was responding to his chemo. There were different stages of the treatment process some stronger and harder than others, some requiring an inpatient stay, and some requiring him to be isolated at home so he wasn’t exposed to any germs.

Due to all his complications, Ryan spent over 2 months in the hospital where most kids would have had outpatient treatment after 4 to 5 days. There were things Ryan had gone through that even stumped the doctors. He lost layers of skin off the palms of his hands & feet and had rashes from head to toe. The

infections took months and many different kinds of antibiotics to beat. He had allergic reactions to some of the medication so it was hard to get his infection under control. Strep had settled in Ryan’s knee and would flare up over and over again finally after 3 surgeries and multiple needle drains of his knee he finally got rid of the infection but ended up not able to walk for over a year. The chemo had caused mouth sores and upset stomach so bad Ryan had lost over 15 pounds in just a few weeks and ended up on IV nutrition for 16 hours a day for 3 months. His liver couldn’t handle the amount of chemo and started to fail during this time as well so it was a delicate balance between giving him as much chemo as the soctors felt he needed, but not too much to damage other organs. We felt like we were back at stage one teaching him how to eat & walk all over again.

It is hard to believe he is now off treatment and healthy. We are still seeing the long term effect of what chemo does to a child’s little body, like emotional issues, learning disabilities, and lack of organizational skills. We are currently work with neuropsychologists that will follow Ryan for years to come helping us figure out what the life time effects chemo has had on him. Even with all he has been through Ryan kept a smile on his face (most of the time) and loves to talk about how great Riley has been to us. Ryan was nominated as a Riley Champion in 2012 and raises awareness for LLS pennies for patient program, he even grew his hair out for Locks for Love to make a wig for others who have lost their hair.