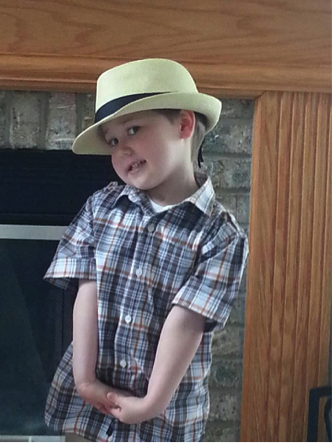 Oliver is the Gilkison’s miracle baby. He was born February 3, 2009. He has surpassed all odds and expectations set before him. Though there were no signs of problems during the pregnancy, Oliver was not breathing upon birth. He was revived, but still suffered from breathing difficulty during his first few weeks of life. While napping, Oliver would stop breathing and turn blue. As the episodes began happening more frequently, Oliver’s pediatrician recommended that he see a pulmonologist at Riley Hospital for Children.

Upon arriving at the pulmonologists door with our stories of “blue” spells and having a few spells in the office the Dr. sent us off for a sleep study. The sleep study was supposed to last a full 3 hours. After 2 hours they stopped the study and admitted us directly into the PICU. Over the next few days we endured a whirlwind of doctors and theories, but the common thread was that Oliver had obstructive apnea. They did a bronchoscope and determined that he had laryngomalacia, and a few days later he had supraglottoplasty. Oliver showed improvement in many ways. However, a week after the supraglottoplasty surgery he had a follow up sleep study, and to our surprise he still had numerous apneas. That was the first time the tracheotomy or trach was mentioned. They did see that he was improving in person even though he was declining on paper, and decided that we could go home for the weekend with the promise to return the following Monday for another sleep study.

We were confident Oliver was making a turn around. We were wrong! His sleep study got worse. Oliver had more obstructions, longer apneas, and higher CO2 levels. Another concern was that he was not hyperventilating despite his elevated CO2 levels. Oliver was immediately admitted, on March 16, 2009, since it appeared that Oliver was asphyxiating himself. The doctors ran several tests to look for causes of the apneas and obstructions other than floppy airway. The geneticists and metabolic doctors told us they didn’t see anything too out of the ordinary, but that they would be watching. Neurology thought that it wasn’t brain related and the pulmonary team thought that it might be a genetic condition called Ondine’s curse. The true problem was that Oliver had serious issues and no proponent to point at. During Oliver’s stay we watched his condition worsen. The rule of thumb is that when a nurse walks fast, you worry; when they run, you panic. He was making the nurses run as he frequently set off his alarms.

After doing one last consultation with all the different departments and exhausting all of our options, we agreed to the tracheostomy. Oliver had his tracheotomy at 1:30pm on April 8th. A few hours after his surgery, he was breathing on his own and feeding normally. Finally, we thought problem solved. This was only the beginning of the next chapter in our story. The next evening after the trach was placed; Andy was at Oliver’s bedside and noticed he wasn’t acting normal. A few minutes later Oliver had a seizure and stopped breathing for 20 minutes. Fortunately, the nurses were able to stabilize him by putting him on the ventilator (April 9, 2009).

This was a major step backwards for us. Oliver let the vent do all the work for about 24 hours until the results of a blood test indicated he was extremely anemic. Oliver received a blood transfusion that gave his breathing a jump-start. However, his breaths were still very shallow and inefficient. The purpose of the ventilator was to give him bigger more efficient breaths, rather than breathing for him as before. A week after the trach Oliver had a follow up sleep study. On the positive side of things, he only had a few brief apneas, which allowed the doctors to rule out central apneas. The study also indicated Oliver still had very high carbon dioxide levels, and was breathing very rapidly and in a shallow manner. As a result of this and the previous events, the doctors told us Oliver would stay on the ventilator for an indeterminate amount of time. Oliver has since been given albuterol, which has brought his carbon dioxide levels down and given him steady strong breaths.

Oliver was sent home on the ventilator after every test came back negative for why Oliver was experiencing breathing troubles. Because they did not have a diagnosis, they could not give us a prognosis. Oliver came off of the vent Christmas of 2009! He had his trach until March of 2010. His stoma had not closed on its own so in the summer of 2011 it was surgically closed. While in surgery to close the stoma they took a muscle biopsy of his thigh. This biopsy confirmed that he had mitochondrial myopathy complex one deficiency (Mito: A neuromuscular disease that is progressive in its degeneration.) This then explained all of his breathing problems, and now his autism but even with this diagnosis we do not know all of what is to come for Oliver’s future. So we move forward blindly only with the knowledge that this is Oli’s journey and lucky are those that can share it with him.