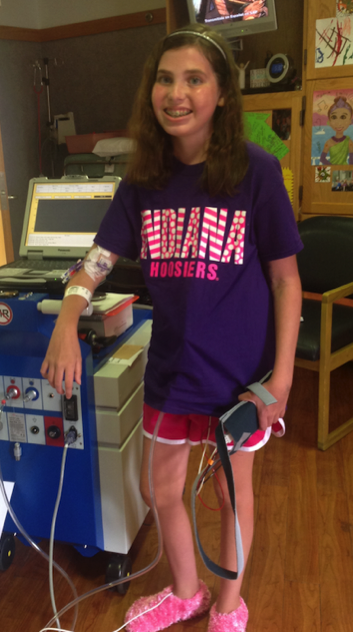 We would like to introduce our newest Riley kid, Emily Hume, as our Riley Kid of the Week! Emily has had an incredible experience at Riley so far and she tells hers own story below.

My story began on July 3rd, 2013. I went to my pediatrician for unresolved flu like symptoms. My doctor ran some tests and said I tested positive for Campylobacter and gave me an IV of Azithromyacin and said I would be good as new! After receiving the medicine from an IV, Dad said I suddenly crashed and was having convulsions while my eyes were rolling into the back of my head. After the doctors worked for about 45 minutes to stabilize me, I was Life-Lined to Riley.

When I got to Riley, I was diagnosed with Cardiomyopathy of the left ventricle and my parents were told that I would need a Berlin heart to keep my heart functioning.

I had surgery to receive the Berlin Heart on July 5th. There were a few complications that caused further surgeries to be necessary. After about 3-4 weeks, I was released to the Heart Floor, I had a daily routine of school tutoring, walking the floor, echo tests, blood testing, and daily monitoring in hopes that my heart would recover and that the Berlin Heart could be ex-planted.

After several months, my Dad asked the Dr. to make a plan for the ex-plant of the Berlin Heart or a transplant. Finally, we got to the day where I went for surgery and they turned the heart off and tested my own heart function with a catheter. Surprisingly, my heart had not recovered enough to allow ex-planting and it was determined that I would require a heart transplant in order to leave Riley.

Late February or early March on a Sunday, we received word that a transplant candidate had been located. I was prepped for surgery and went down for surgery. Early Monday morning, my parents were informed that the candidate heart was not good enough.

On March 21st, we received word again of a transplant candidate. No one got too excited due to the disappointment of the previous transplant attempt. However, this time I did receive a new heart. How miraculous and self-less was the person willing to donate a life-giving organ, which gave me life.

After a couple of weeks I was released to Ronald McDonald house for another 3-4 weeks. We would make daily visits over to Riley for blood testing and heart testing. Finally, we were together again as a family after a 10-month stay at Riley. It felt so good to stay at Ron Don where I had more freedom.

I am now able to attend school with my peers and do things that I had not enjoyed for many months. Riley and Ron Don were wonderful. Thanks, so much Riley. Riley is now a permanent family member.

We want to welcome the Hume family to PUDM and hope to meet all of you soon and see you at the marathon in a few short weeks!