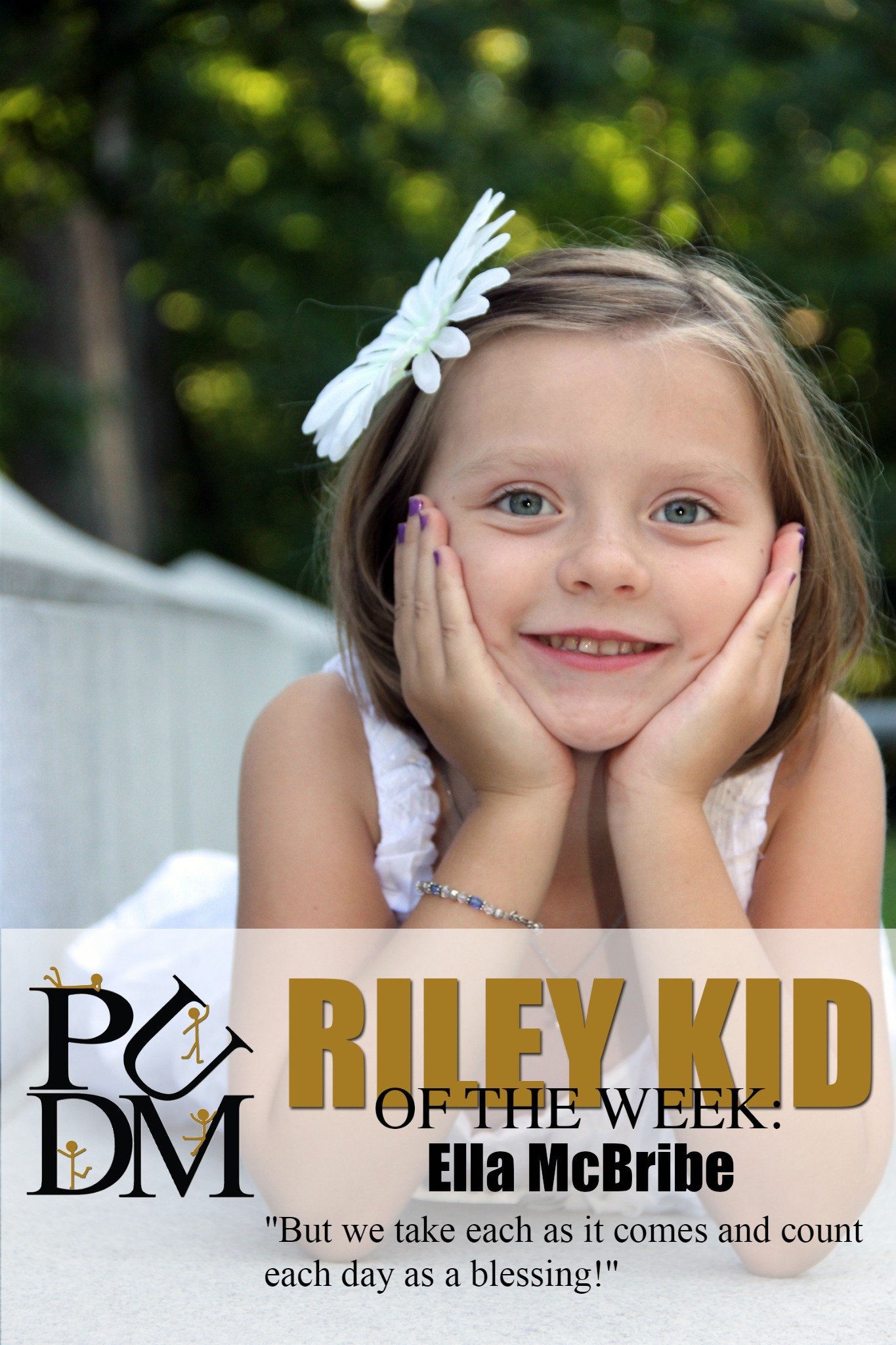 Meet our Riley Kid of the Week for this week – Ella McBride! Find out a little bit more about her Riley story below.

From the time Ella was 6 months to a year, she had stopped growing and was not hitting milestones. We were visiting the Dr often and it wasn’t until July 31st of 2006 when she was at her weakest, she was admitted to the hospital and was in heart failure. She looked perfectly normal on the outside, but little did we know that on the inside, her body was slowing dying.

It wasn’t until she was admitted into the hospital and we found out that her blood pressure was dangerously high (running in the low 200’s). I will never forget overhearing the ER dr. telling the nurse to have the chaplain meet us in our room once we get settled. At first, I thought it was such a kind gesture of the Dr. and it wasn’t until much later we realized he had done that because he didn’t know if Ella was going to make it.

After about two weeks of testing and hearing lots of, “ we may never know what is wrong with her”, they found that she had a rare narrowing in her abdominal aorta and narrowings in her renal arteries going to her kidneys. Her left kidney was not functioning well at the time. Basically, what had happened is with the rare narrowing, her kidneys were not getting enough blood and they were telling her brain – we need more blood and that made her heart work overtime, which over time enlarged her heart and it was wearing out, that is how she ended up in heart failure. With meds, her heart began to get stronger and at 15 months old ( in Oct) she had her first surgery ( which saved her life). They opened up the narrowing to allow normal blood flow. She still needed blood pressure meds after surgery.

After her first surgery, she had other complications, which has resulted in several tests, gastro issues, vomiting issues, iron deficiency, continual blood flow issues to her kidneys. Unfortunately a blood clot developed in the graft that they placed to her left kidney, so her left kidney stopped working and as she grew the narrowing to the right kidney returned, so she needed a couple balloon procedures to that right renal artery.

After a two balloon procedures her right kidney stopped growing, so the Dr’s. decided that another route would be best. Continual ballooning of the renal artery would be too risky, so after much deliberation and a second opinion, another major surgery was put into play — an Auto kidney transplant for the right kidney and removal of the left kidney. This was the first time Riley had performed and auto kidney transplant on a child. What a stressful year. The surgeon felt it was best to have a match in place as a back up plan in case the surgery did not work. So, luckily, I was a match. I went through all the same testing as Ella did. The whole experience was very eye opening and humbling.

So, in October of 2011, Ella had surgery. When the surgeon first came out after surgery, he looked very nervous and fidgety. He had stated that he had used the smallest suture that he had ever used and the surgery was much more complex once he got in there and he would like to never do that surgery again. Reassurring right? I actually, really appreciated his candor and honestly. A half an hour later he returned with a completely different demeanor and stated that Ella’s ultrasound looked great and she was peeing buckets! He was so pleased. The surgery was a complete miracle, blessing and success. The several days following the surgery were challenging and difficult for Ella, but she overcame. Her body healed as the months went on and less then a year after surgery we were able to completely take her off her blood pressure meds — something her kidney dr. never thought we would be able to do. She is a little miracle!

Ella will always have follow up visits at Riley and we won’t know until she is done growing if she will need another surgery on her abdominal aorta and her surgeon said she will most likely need a regular kidney transplant sometime in her lifetime due to her kidney being under so much stress her whole life. But, we take each day as it comes and count each day as a blessing.