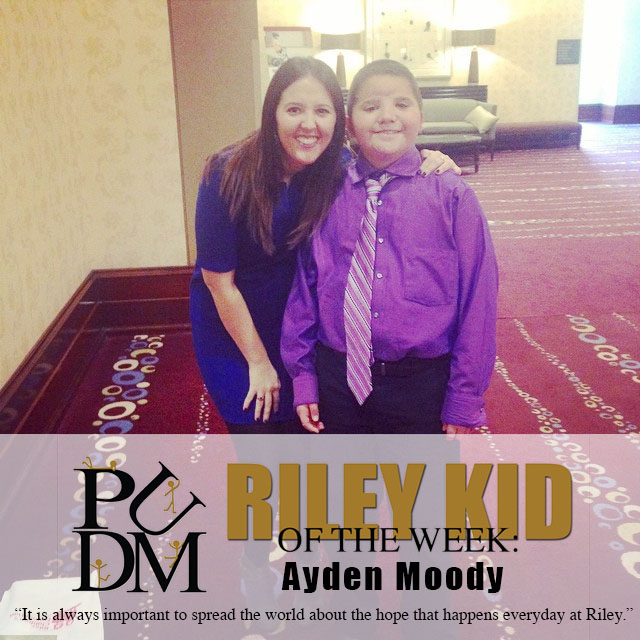 Ayden was born with a condition called craniosynostosis. This condition caused Ayden’s soft spot to closer prior to his birth. Of course, the soft spot is essential for brain growth so when Ayden was about five months old, he underwent a cranial reconstruction.

The surgery was successful and Ayden started to grow and develop normally. Then when Ayden was about three and a half years old he started to develop some very unusual symptoms. He was having trouble walking and his knees would ‘give out’ and he would wake up with excruciating headaches and they would cause him to vomit until he ended up dehydrated and needed to go to the emergency room. He was also sleeping approximately sixteen to twenty hours per day which is not normal for a little boy.

In June of 2007, shortly after his fourth birthday, it was discovered that Ayden suffered from a condition called Chiari malformation. This condition caused the tonsils at the back of the brain to abnormally hang into his cervical spine, causing an imbalance in his cerebrospinal fluid and also had caused a syrinx to develop in his spinal cord and was causing problem with his knees.

Ayden underwent a Chiari decompression in August of 2007. He successfully recovered from that but once his head began to grow normally and function normally again he needed a revision of his cranial reconstruction. He underwent another reconstruction in June of 2008. Ayden was then suffering from some other issues and a tethered spinal cord was discovered and he then had a tethered spinal cord release surgery in the fall of 2009.

Ayden’s cranial problems continued through a third and fourth cranial reconstruction. Finally in May of 2013, Ayden had a shunt placed to help regulate his cerebrospinal fluid. Although the surgery seemed to be successful, his shunt became infected and in September of 2013 he had to have his shunt removed and had a month long stay at Riley until the staph infection in his brain cleared so the doctors could go back in and place another shunt.

Since November of 2013 Ayden has been pretty well but every year is evaluated to see if anything further is needed. We are currently awaiting the appointment with his neurosurgeon, Dr. Smith, and was recently evaluated by his plastic surgeon, Dr. Tahiri.

No matter what his doctors decide, we know that Ayden is in good hands and that they will do what is needed to take care of him. Ayden has always been very brave and never looked at his condition in a negative light. He feels very fortunate that he is able to leave the hospital each time they fix his problems and knows there are many that are sicker and suffer more than he does. Ayden enjoys collecting pop tabs for the Ronald McDonald house and is almost half way to his goal of a million pop tabs. He also tries to talk to anyone and everyone who will listen to his Riley story because it is always important to spread the world about the hope that happens everyday at Riley.