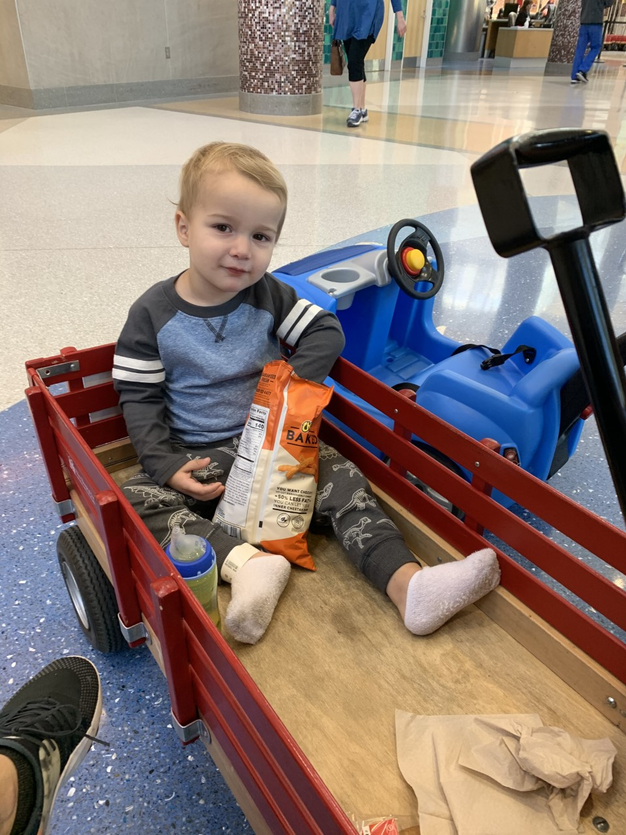 Cohen was diagnosed with the rare Kawasaki disease on Tuesday 10/6/19 after being super sick with a high fever that wouldn’t go away, a rash all over his body, red eyes, red lips that were cracking, very lethargic and fussy, and was limping when he walked. We came to our local Urgent Care and he sent us straight to Riley ER because he was concerned for the possibility of him having Kawasaki disease. We got to ER and the doctors and labs confirmed the diagnoses of Kawasaki disease. We were admitted right away and were in the hospital until Saturday 10/12/2019. Cohen had multiple labs, chest x-ray, and an echo cardiogram on his heart to confirm the diagnosis. Cohen was then given a 10-12 hour infusion through his IV of IVIG. IVIG is thousands of people’s anitbodies (thank goodness for blood donors) and it helps with the immune system and it supposed to calm down the inflammation in the vessels of the body and heart. There is a 10 day window when they need to have this drug. Cohen was on day 4 which is amazing. Most kids are misdiagnosed. Treatment was rough, but Cohen got through. He had a great day the following day, but then about 22 hours after treatment he developed a high fever again (103.5). We then had to stay longer because he was on the radar for another treatment. They monitored him the rest of that day, night, and into the next day and thankfully Cohen did not spike another fever. We are at home now and Cohen has some lingering symptoms but those should go away with time. Kids with Kawasaki disease have a higher risk of heart disease so we will go back to Riley in 4-6 weeks for another echo and then he will have to have yearly  echos after that. This was by far the most emotional time I have had. Not only was I worried about Cohen, we didn’t get to see our other children while we were at Riley. I feel a lot of anxiety worrying about the future. Riley was amazing and the staff there were phenomenal. We felt very lucky to be in their care.