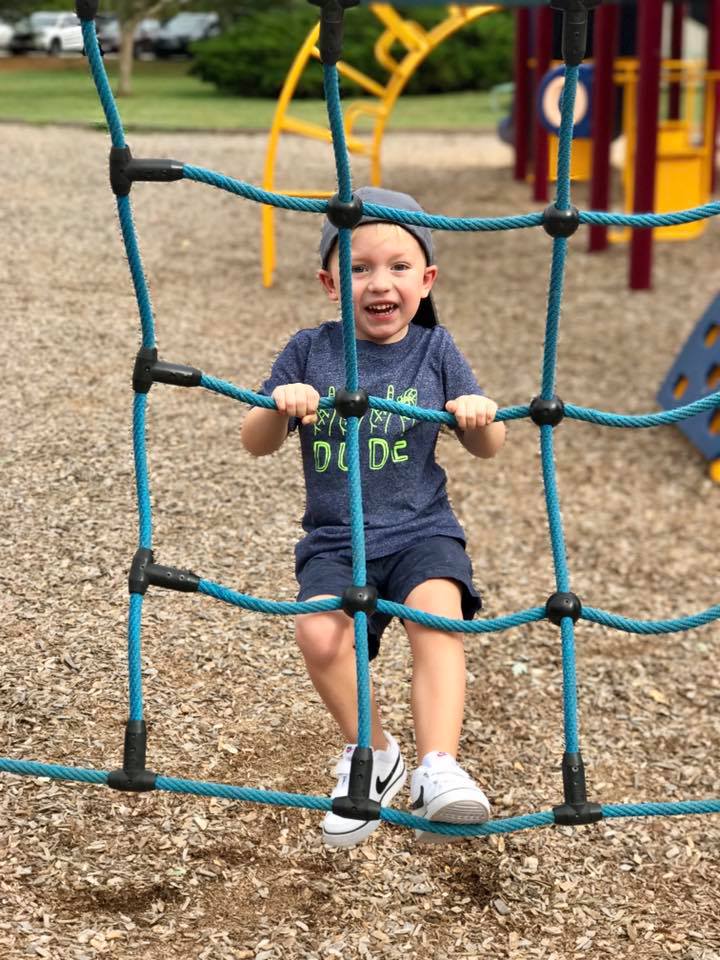 When Cade was around 9ms old he presented with what looked like seizures. As you can imagine we were terrified that he too had an AVM. We were sent to our local hospital and from there given the choice on transporting him to a (closer) Chicago Childrens Hospital (Lurie) or back to Riley. We made no hesitation in choosing Riley. He was transported via critical care ambulance to Riley hospital. Upon our arrival we were met by a team of Drs waiting to rush him to MRI with the same fear we had of a repeat of an AVM just like Zane. They admitted him and we were informed it would be 12-24hrs before he would have his scans. Those were probably among the longest and scariest hours of our lives at that point. When his scans were finally completed we received the news that Cade did NOT have an AVM. Honestly at that point I was only half listening to the rest of the results. I remember hearing Chiari 1 blah blah blah. That’s seriously what my mind was hearing, blah blah blah. I remember thinking as I let out a weird laugh “Chiari? We can handle that!”. Little did I know ….. We were released 2 days later and set to come back for further imaging and an appointment with his neurosurgeon. I was confident that we would have his next sets of imaging done and that would be that we would just follow up yearly and he would never have an issue. I was wrong. Upon completion of his next imaging it was determined that Cade not only had Chirai 1 but he also had Syringomyelia. He would need a sleep study to confirm the degree of his sleep apnea (he had this at birth) and a swallow study to determine if he was aspirating his food/liquid. We scheduled those for the following month. When we got the results of both tests it was found that Cade had severe central sleep apnea and silent aspiration. He would need brain surgery. His first brain surgery was scheduled for Oct 23, 2014. He recovered well from that one and we felt things would finally settle down and life would go on with some degree of normalcy. Ha we should know by now that’s not how things work in our family. In February Cade presented with what appeared to be a pediatric stroke. He lost use of his left side. We again made the trip to Riley to see his neurologist. She immediately had him admitted and at this time we added a few more wonderful Drs to our team. It was determined that Cade has what’s called Alternating Hemiplegia of Childhood. He spent a week inpatient undergoing numerous tests during that time. We were sent home with apnea monitors and to get our affairs in order once more before returning for a 2nd brain surgery for Cade. He underwent his 2nd surgery on March 9th 2015. This recover was much harder than the one before. Now here we are just a couple of years later and it appears he will likely undergo a 3rd surgery within the year. This time to release a tethered cord. Riley is truly a second home to us. As much as I wish it weren’t so I can’t think of another hospital I would rather be at. Truly the staff here is amazing.