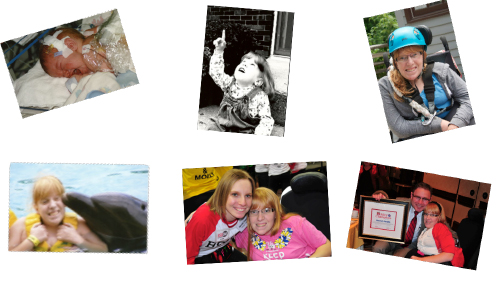 Hannah’s story started July 17, 1995.  The day before she was born her family found out that something was terribly wrong.  This is the day they found out that Hannah’s spine had not formed correctly and Hannah would be born the next day via an emergency C-Section at Memorial Hospital in South Bend Indiana.  Hannah stayed there for a month before she became a “Riley Kid”.

For the first year she had appointments at least once a month and saw several doctors at each appointment.  She has had surgeries from head to toe, too many to count.  One great thing about Riley is that no matter what specialist you need, they have the best!  That makes it a lot easier for Hannah’s family, knowing that she is in the best hands!  The doctors and nurses have become part of their family.  They say that Dr. Cain knows Hannah inside and out!  Hannah is not sure what her life would be like without all of the doctors like him.

Riley has done so much for her that she has decided to give back, after going to BSUDM with her sister she decided to create a Dance Marathon at her High School.  With the help of outstanding students at PHS they had their first Dance Marathon in 2012 raising over $11,000 and in 2013 they raised over $20,000!!!!  Last November Hannah was named one of the eight Riley Champions for 2013!

Hannah loves dance marathons and is so happy she got involved because she has met some amazing friends and other Riley families!  She says she will always be a Riley Kid and she is proud of it!!!