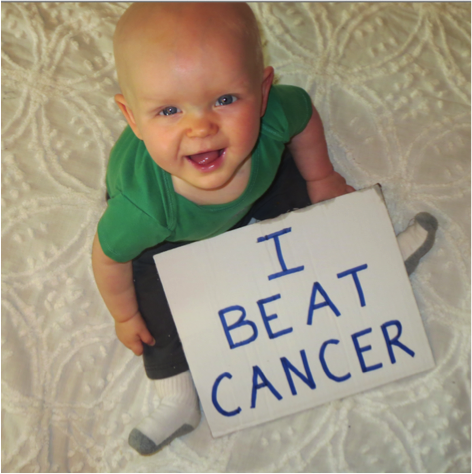 We would like to welcome our newest family to PUDM, the Meyer’s! We are absolutely thrilled to have them and their son, Cecil, who is shown above. Riley had a huge impact on Cecil’s life and his story is told below.

Cecil has had a rattle in his chest since he was three months old. Despite months of doctor’s visits and many medications, it never got any better. In fact, it got so bad that on Tuesday, March 4th, 2014, he was rushed to the hospital because it had grown so hard for him to breathe that they were afraid he would eventually become too exhausted to continue. He was air lifted to Riley, where they discovered he has cancer. His tumor was so large that it took up the entire right side of his chest cavity, crushing his trachea and blood vessels in the process. He was attempting to breathe through a 1mm opening. The doctors were unsure if Cecil would make it through the night.

After days of waiting for a test and then the results, it was discovered that Cecil has Neuroblastoma, a large cancerous tumor that is found in infants with most cases occurring in children younger than two years of age.

Cecil underwent 4 rounds of chemotherapy in March, April, and May of 2014. There was much sickness and many trips to Riley for this or that; but most importantly, he was breathing on his own, without any problem! He responded very well to the chemotherapy and the tumor shrunk 82% with this treatment. Once it was reduced to that size, the surgeons felt it was finally small enough to surgically remove the remainder of the cancer. On May 27, 2014, he underwent a median sternotomy procedure to remove the tumor. The surgery went beautifully; the veins peeled away nicely, his heart was not in the way, and they did not have to sacrifice any muscles.

We have been home from Riley since early June, with CT scans and check-ups every few months. We were recently just at Riley and had a cancer free celebration! Cecil is almost 14 months old, and with all the time spent in the hospital and the lost belly time due to the tumor, his method of getting around is through butt-scooting. He has a physical therapist that works with him on learning the skills to crawl and walk.

We want to extend a warm welcome to the Meyer family and are so excited to meet them in person and learn more about their wonderful family!