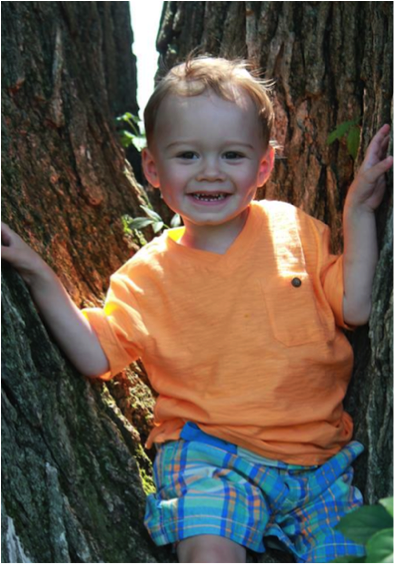 Our Riley Kid of the Week for this week is Caleb Hoppe! Caleb has an incredible Riley story and it is told below.

On May 21, 2012, Caleb went to his Laporte pediatrician for blood work for unexplained bruising. Later that night we got a call from Caleb’s pediatrician saying to go to South Bend Memorial oncology/hematology for another blood draw.

That night in a conference room, they told us the horrific news…Caleb has leukemia. Since it was so late at night by the time all was said and done, in the morning we were rushed, by ambulance, to Riley. That morning at Riley, Caleb underwent a bone marrow biopsy and spinal tap to see what type of leukemia he had and to see if it spread to his spinal column and brain. Luckily they found no leukemia cells in his spinal fluid! He was diagnosed with Acute Lymphoblastic Leukemia. He was put on average risk treatment due to the fact that he was under 2 and the amount of leukemic cells found in blood samples.

We stayed at Riley for 6 days. In those 6 days, Caleb had surgery for port placement, started chemo, had another spinal tap, another bone marrow biopsy, and had blood and platelet transfusions. Saying it was a rough week was an understatement.

Leukemia treatment is unusual because it’s in blood and blood travels everywhere. There are no stages. There are 6 phases of treatment: inductions, consolidation, interim maintenance 1, delayed intensification, interim maintenance 2, and then maintenance. Complete treatment for a boy is 3 years, 3 months and for girls it is 2 years. These phases are all different and involve harsh IV chemo, oral chemo, spinal taps, bone marrow biopsy, steroids, and injections.

Caleb went back to Riley at the end of month 1 for another bone marrow biopsy. Caleb still gets his daily oral chemo from Riley. If anything should happen to the port, Riley will also be the one to fix or replace it. When treatment is completed on July 31, 2015, Caleb will go back to Riley to get the port removed.

Caleb was in remission early on, on June 1, 2012. Although in remission leukemia has the tendency to come back, so the treatment is a long process to keep it away for good. Caleb is in the final phase of treatment, the maintenance phase. He now receives IV chemo every 4 weeks, spinal tap every 12 weeks, oral chemo daily, steroids twice a day for a week every month, and antibiotic on weekends.

Caleb and his twin brother, Carsen, are absolutely adorable and we are so glad they are a part of our PUDM family!

[box] Caleb was featured in an RKOTW post back in September of 2013.