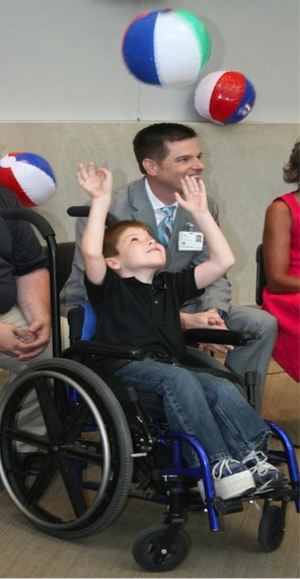 Our Riley Kid of the week is Braden Tamosaitis! A lot of exciting things have been going on in Braden’s life this past year. He is also getting ready to celebrate his birthday on March 10th! Braden will be turning 9 so be sure to wish him a happy birthday. In 2013, Braden was one of 50 Children’s Miracle Network Champions and represented the state of Indiana, which is so incredible! Braden also recently just had the opportunity to sign with the UIndy men’s soccer team! Braden will have the opportunity to participate in as many team activities as he can and the student-athletes are so excited about getting to know him better. During one of his stays at Riley, Braden had an amazing idea of a way to give back to the hospital that has given so much to him. Braden tells a little bit about his efforts below:

“During my last stay at Riley, my Mom brought in a beach ball for me to play with. I had so much fun hitting it all over the room, and it didn’t hurt anything! I would play with anyone who would hit the ball with me. It was so much fun, my Dad went to the store and got me a few more, so I could have lots of them in my room to play with. I would even have the doctors and nurses playing with me when they were supposed to be working! I would throw the ball at them when they came in the room, and I even tried to throw it at them when they went by my room in the hallway!

I had so much fun with my beach balls! One day, I saw one of the other patients on my unit that would pass by my room all the time, and sometimes she would stop and chat with me. I told my Mom that I wanted to give her one of my beach balls. The nurses were able to clean the ball and give it to her, so she could have fun too! I like doing that so much that I wanted to give one to the little boy in the room next to mine too. Then, I made my dad go to the store and buy lots more beach balls to give to the other kids on my unit at Riley!

When I finally got home after my surgery, we had a big party at my house. I invited everyone that came to visit me when I was in the hospital… but I told them they had to bring me beach balls so I could donate them to Riley Hospital for all the other kids! I wasn’t sure if it would work, but it did and we gathered up almost 150 beach balls for Riley! I had so much fun doing that, that I told my Mom and Dad I wanted to do it again and again, so they are helping me get more beach balls to donate. I can’t wait!!!”

As you can see, Riley Hospital means a lot to Braden. He also shares his Riley story with us:

“I was born in March of 2005, and even before I was born, my parent’s knew that I had so many tough things ahead of me. I was born with Spina Bifida, as well as Hydrocephalus and an Arnold Chiari II malformation. In other words, things were really complicated from the start! On top of all that, the doctor’s told my Mom and Dad that I probably wouldn’t even survive birth, and even if I did that I would have very little use of my lower body, and I’d have very little cognitive ability. Boy were they wrong! I like proving the docs wrong whenever I can, and I have had many chances to do just that. In fact, I was so strong the day I was born, that I had my very first surgery when I was only a few hours old! Then my second one the very next day! Even though I am only seven years old, I have already had fifteen surgeries. They have worked on so many parts of my body, that my Mom and Dad call me Superman, because I am a boy of steel!”

Be sure to wish Braden a very happy 9th birthday!