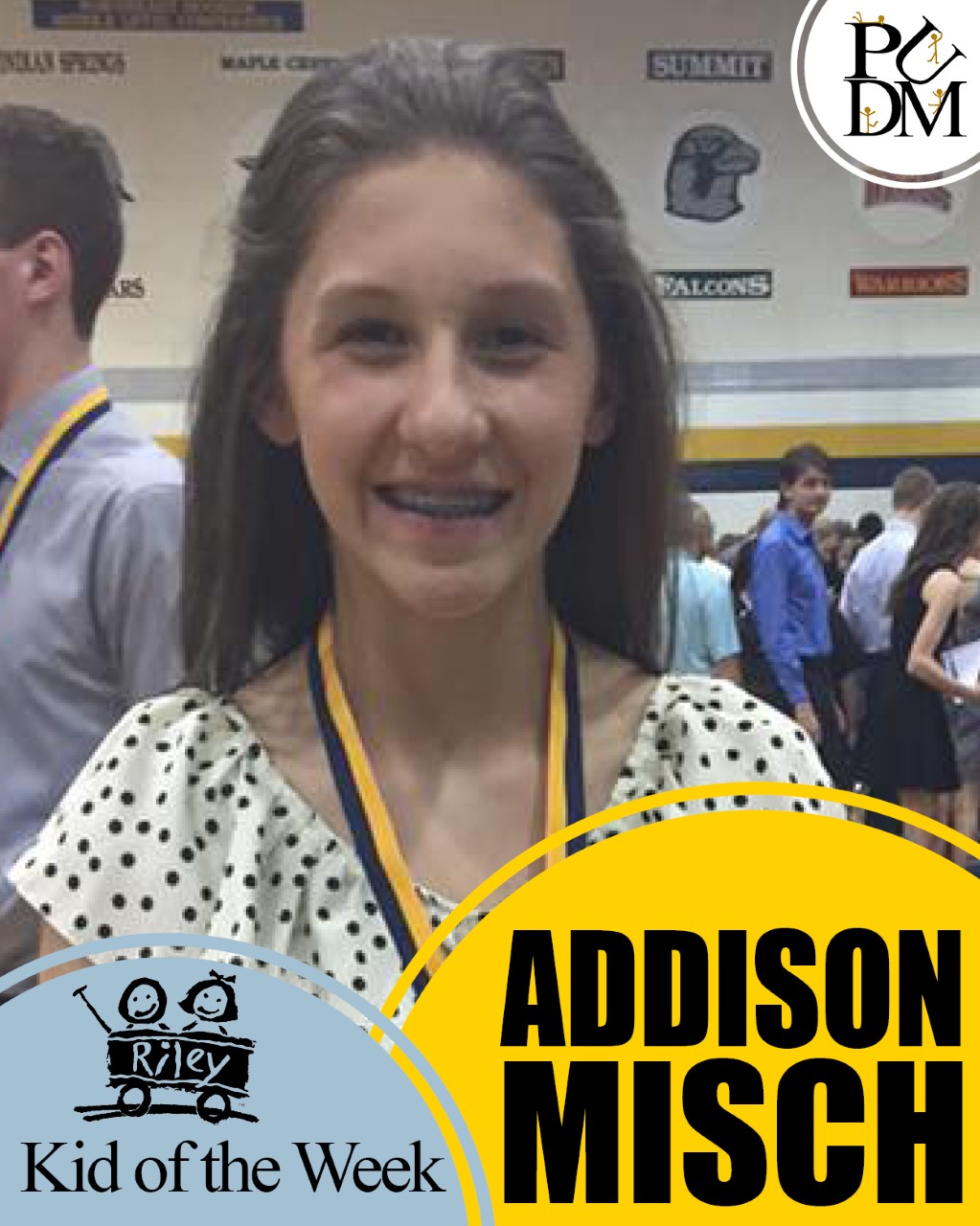 On Myrtle Beach vacation of summer 2013, I (mom) found Addison standing in the condo bedroom doing a very strange shaking spell. Her elbows were bent up and her hands/ arms were both shaking like she was trying to shake off excess water. She was also spinning in a slow, lethargic circle with her right foot as the pivot point. She also would not respond to me when I “talked” (and yelled) because she wouldn’t answer.

When the episode ended, Addison explained that she could hear me, but couldn’t talk back. She explained that this had happened to her before and that she had actually been able to “stop” some of them by trying to relax calm down.

When we returned home from vacation, we scheduled an appointment with her Ft. Wayne pediatrician, who ordered an EEG and referred us back to her pediatric neurologist, Dr. Joe Ottinger. Dr. O had taken care of Addison when she’d had a grand mal seizure at the age of 2. Dr. Ottinger found nothing abnormal on the EEG so he ordered an MRI. We went for that the next day. Before Addison was even done with the MRI, the tech told us we had to go back to Dr. O’s office immediately.

Dr. Ottinger explained the MRI showed a tennis ball size tumor on the back left side of Addison’s brain that must be removed. We were all scared. Dr. Ottinger asked us to wait as he contacted Riley Hospital because Addison would receive the best specialist care there. He mentioned hoping we could get connected to Dr. Jody Smith, in his opinion, a most excellent pediatric neurosurgeon. We didn’t know then, but we do now, that “most excellent” is an understatement.

God was watching over us as Dr. Smith, a very BUSY pediatric neurosurgeon, happened to just have a surgery cancellation that following Monday only if we could come see her for a pre-surgery appointment tomorrow, a Friday.

So we started sharing Addison’s story with family and making all the plans we could to not only get Addison, Mark and I to Indy for the pre-surgery appointment but even more. Addison’s grandparents, Uncle Brian, Aunt Kelly, and Aunt Tricia were HUGE help. Grandma Misch, Uncle Brian and Aunt Kelly made plans to stay in the extended stay hotel tool we got so that Elle and Christenson were close to is during our time in Indy from the night before surgery until we came home. Aunt Tricia took care of our broken washing machine and on and on.

On Sunday, Addison stood in front of our ZUM church family and explained the tumor, what Dr. Smith would do on Monday and that she believed God would take care of everything. That evening all 5 of us loaded up the car and headed for the hotel. That night there was NOT much sleeping for Addison, her dad or me. We were all nervous.

The next morning we went in EARLY to check in for surgery. The front desk man even told us that part of Addison’s fan club was already up in the waiting area.

She did all of the pre-surgery get ready and finally it was time for us to leave her. As we walked her to where they would sedate her and do another MRI she had the opportunity to look up to the waiting area and wave to her growing fan club 🙂 She was SO brave!

We (Mark, Elle, Christenson and I) spent 16 hours waiting with 24 different friends and family members. Eating snacks, taking walks, drinking Coke, playing card games, sharing meals, and waiting. We cannot thank Riley enough for the top of the hour check ins by the nurse with information about surgery progress. A special thanks must be paid to the surgery nurse who insisted on our behalf that we get a Ronald McDonald in hospital room for the night. We watched the waiting room fill up and then empty around us. Addison was the first patient in and the last patient out. When we FINALLY got to see Dr. Smith after surgery, she still looked like a rock star! (Her residents looked like they were about to crash!) Dr. Smith shared that the tumor was both solid and vascular but that she was confident she has removed everything and taken care of the spot where the tumor was most attached and growing from. She explained the tumor had both malignant and benign characteristics and would be sent to Mayo pathology to help determine what the tumor was. By this time, we where allowed to go back to recovery to be with Addison. She had a crazy hair do done to keep her hair away from her incision. She told us all kinds of crazy stories about chocolate bunnies and dinosaurs as she came out of the 16 hours of sedation.

She spent the next 2 nights in pediatric ICU with more great nurses who took great care of her and us. Her brother and sister, aunts and grandparents took turns coming in with Mark or I to see for themselves our own miracle. We shared our story on FB with our family, friends, community, and school coworkers. The support of encouraging words was amazing. I got to sit and read peoples comments to her and let her see all of her likes on our posts. She was gaining strength and balance the whole time, managing pain along the way. Her body had some major pressure marks on her shins and hip bones from laying on the surgery table for so many hours. These bothered her most.

Late Wednesday evening she was moved to a room in the new Simon Tower. It truly was the Hamptons like the PICU nurses had said! The three of us rested there. The next day she was doing more to get up out of bed, stay wake with all of her fan club visitors, and move around. She was eating well (and even got some Cheesecake Factory cheesecake from her youth leader Mike and his daughter Abby!)

On Thursday after a final check in with Dr. Smith and the OT AND PT they Addison go home. Dr. Smith said she would heal best at home and she was right. With a spreadsheet to track all the meds she needed for awhile and an air mattress set up so she could be with all of us in the living room we were back at home really resting and healing.

Once home Addison had an appointment to follow up with PT as she was still experiencing some right side weakness when we left Riley. At that evaluation her right side actually tested STRONGER than her left side.

Addison only missed the first 3 days of school (to make her mother happy, not at her choice) and after she got back into school she never skipped a beat. She did great academically at school and kept up physically as well too. After Dr. Smith saw Addison for a follow up appointment she was actually released for sports and ran the last 4 meets of the middle school cross country season. She was amazing, she is amazing. We thank God for our miracle, Dr. Smith and the healing that happened for us at Riley Hospital.