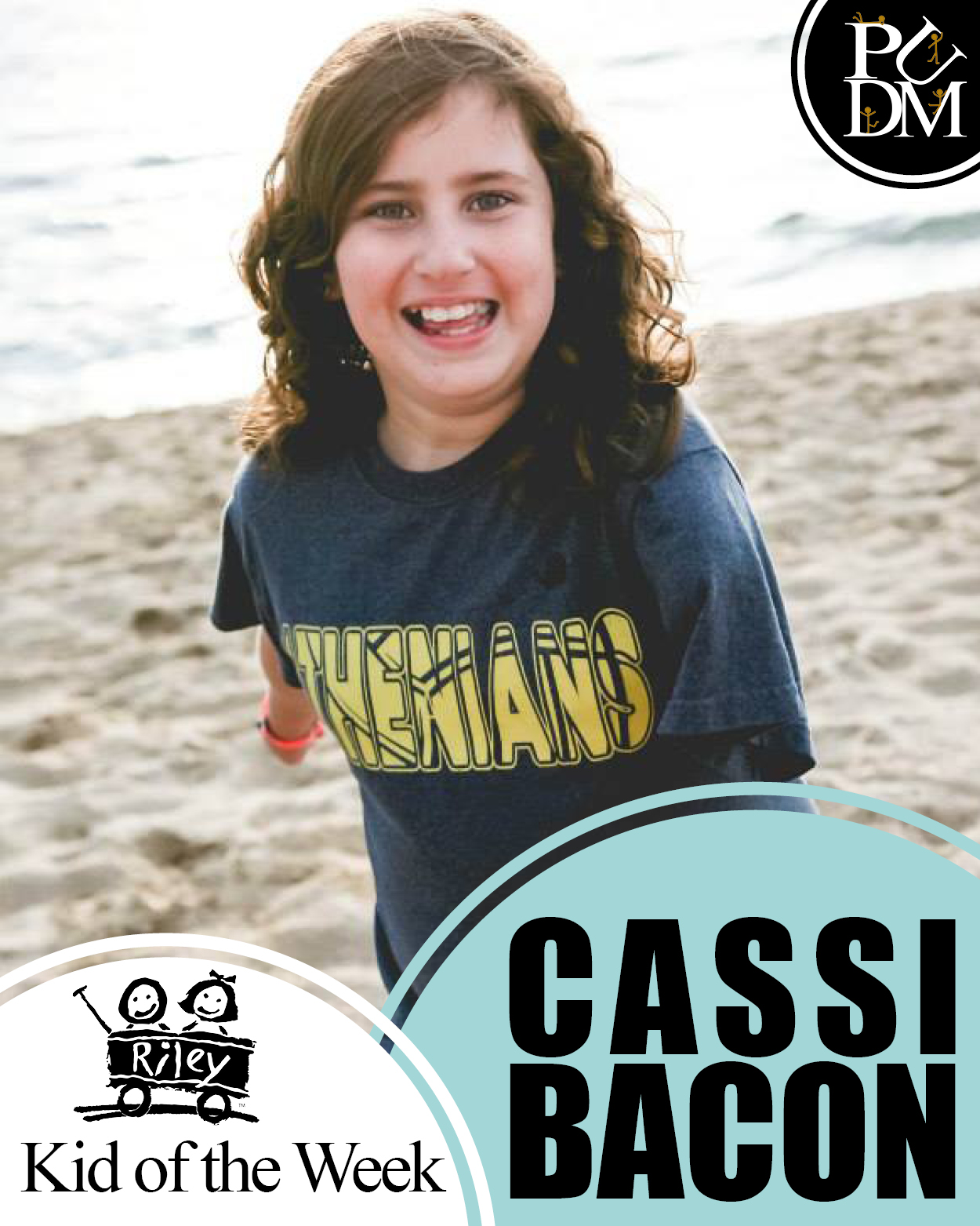 Cassi Nicole Bacon was born on August 21, 2004, although her anticipated due date was a week later.    The pregnancy went very well, and an ultrasound two weeks earlier had shown a baby girl who appeared to be perfectly healthy.     During the late afternoon of August 21, Saturday, I noticed that the baby wasn’t moving around as much as she usually did.  I could feel movement, but it seemed very slow.  It was unlike the energetic little baby that had been kicking around in the days before.   We decided to call our doctor and check with him about the recent change.  Thankfully, he was very proactive and suggested that I go to Lafayette Home Hospital for a stress test.  They determined that the baby was moving around, yet  I could not feel the movement.   More testing showed that her heart rate was not responding to stimulus as quickly as the doctor would have liked.  He decided that she needed to be delivered as quickly as possible and performed a C-section that night.  She was born around 1:00 am Sunday morning.

My older daughter had been born by C-section as well, so I knew what to expect.  It was apparent that something was wrong as soon as he lifted our baby girl from my womb.  I vividly remember hearing a nurse say, “Get the dad!” as the fear registered on my husband and they believed he was about to pass out.  Cassi was quickly passed off to the awaiting pediatrician without my catching a glimpse of her.  My doctor then said “The arm….is she okay?”  When the pediatrician responded, “We’re working on her”, fear gripped me as well.  Her apgar scores were low, and I knew that was not a good sign either.

She was  placed in the NICU and several specialists looked at her.  It’s very difficult to explain what her arm looked like at that point.  Each possible diagnosis was ruled out, and she was transported to Riley Hospital on Monday morning.   The fear and anxiety that my husband and I felt as we watched the Riley Transport Team pull away with our precious baby was overwhelming.

Upon arrival at Riley, she was taken directly to the NICU where there was a team of doctors waiting for us.  It didn’t take long for them to make a diagnosis.  Ultrasounds showed several blood clots had formed in Cassi’s neck area.  The largest of these, had completely stopped the flow of blood to her left arm and the arm tissue was simply dying due to the lack of oxygen.  Her right hand/arm was also starting to be affected.  I remember my older daughter saying, “It looks like her fingernails are painted purple.”  Sadly, it did.  This meant her right arm was at risk as well. They thought the blood clots probably started forming within the 18 hours before her birth.  We had a diagnosis, but no reason to explain the cause.  The treatment plan was to feed her through a feeding tube because they wanted to rule out blood clots elsewhere that could make digestion dangerous.  They also needed to keep her left arm sterile and give her the drug Heparin to thin her blood in hopes that  the blood would flow faster and stop/dissolve  the other clots.  She responded to the treatment, but I can still remember the day that the doctor told us that she would not be able to keep her left arm. It was too badly damaged and would have to be amputated.    Hearing that news would seem to be the worst scenario possible, but after the fear of losing our precious little girl, our only questions was,  “When?  Let’s do it and get our baby home.”

That is when the wait began.   Because Cassi needed the blood thinner to take care of the other clots, they didn’t want to perform the surgery right away.  We spent the next week and a half waiting and watching our little girl become healthy enough to tolerate the surgery.  Thankfully, we were able to start feeding her with a bottle after the first couple of days.

My husband and I stayed at the Ronald McDonald House after the second night and we relied on family members to take care of our older daughter, Kayla, who was nine years old at the time.  Kayla was brought to the hospital about every other night for visits.  We spent every day sitting in the NICU holding our baby and observing what an amazing place Riley Hospital is.   It was incredibly hard to leave her at night, but the nurses were so understanding and came to expect my 2 am phone call to check on my baby girl!  Nurses sat with us, hugged us, brought me a foot stool to rest my swollen feet upon, and patiently explained everything to both us and our older, inquisitive daughter.  The residents and fellow doctors were all amazingly patient with us as we asked question after question.

As the day of surgery got closer, our fears began to escalate.  With our family and pastors around us, we prayed for Cassi to have a successful surgery and a speedy recovery.

Our prayers were answered!  She came through the surgery fine and was only in recovery for a short time.  The NICU staff was amazed to see us walk back into their unit.  The next challenge came when the bandages came off and we saw her ‘little arm’.   As we prepared to go home, we learned how to change bandages, clean surgical wounds, and give injections.  We were told that Cassi would need daily injections of Lovenox for 6 months so that all the blood clots would be gone.

We made many trips back to Riley during the years of 2004 and 2005.  There were blood tests to check appropriate levels and follow-ups with the plastic surgeon who did the amputation.  In August 2005, following her first birthday, she had her last blood test that showed all blood levels were normal and functioning well.  The doctor was ready to release her from his care.  The cause of the blood clots was still unknown, and we were told that we would probably never know the cause.

Unfortunately, we needed the service of Riley again when Cassi was in kindergarten.   She had developed a cyst on the end of her little arm, which we knew nothing about until she bumped into a rock wall at her school.  The cyst ruptured and was actually leaking fluid out of her arm.  She had to return to the plastic surgeon and have a second surgery to remove the end of the bone and clean out the debris from the cyst.  That surgery was outpatient, and once again, everyone at Riley was incredible.

Today, Cassi is a busy nine year old girl and loves to be involved!   She enjoys sports and has played soccer, basketball, and volleyball.  She is currently swimming with our local swim club and was recently chosen to be a Student Council Rep for her third grade class.  Having one arm has really not slowed her down much.  She rides her bike with ease and even attempted the zip line at her church camp last summer!   She has had two prosthesis and is currently in the fitting process to get a new prosthesis with an electric hand.  Her willingness to try new things is an inspiration to us.  She is truly amazing and does not let her physical challenge slow her down.

We are so thankful that we live close to Riley and were able to get the help that we needed for our precious baby girl.  Our family will be forever grateful for the wonderful doctors, nurses, and all the support staff at Riley.

We have been married for 25 years and are the parents of two beautiful daughters.   My husband and I are both graduates of Purdue University with degrees in Education.  Gary taught Algebra for most of his career and has coached junior high and high school basketball and football.  He recently changed positions and is now a Technology Coordinator at the middle school in Crawfordsville. I am an elementary teacher and presently teach 5th grade in Crawfordsville.  Our older daughter, Kayla, is a 2013 graduate of Crawfordsville High School and is a freshman at Purdue majoring in nursing. The Riley nurses made a huge influence on Kayla during Cassi’s stay, and that is one thing that has inspired her to pursue a degree in nursing.    We enjoy camping and trips to the beach in our free time.