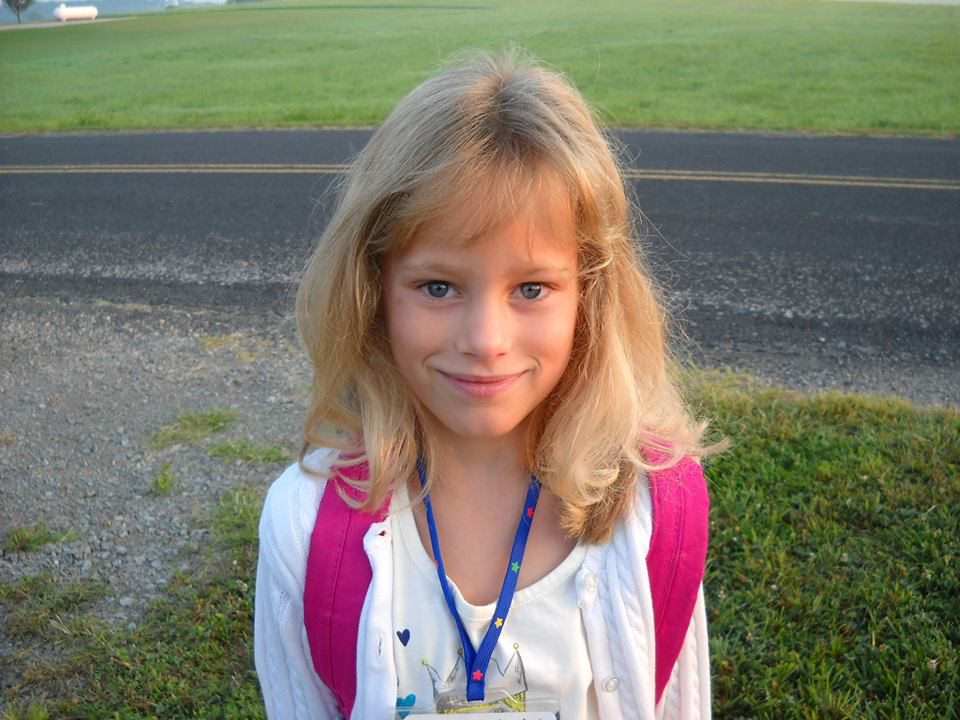 Olivia was born nine days after her due date in a small community hospital in Angola, Indiana.  She only weighed five pounds two ounces even though she was a full-term (overdue!) baby.

When she was three hours old, she was taken by ambulance to a hospital in Fort Wayne, Indiana because our small hospital wasn’t equipped to take care of her.  She had a collapsed lung and was having trouble breathing.

Sixteen hours after her birth, I was in a car on my way to the hospital where she was staying.  My husband was already there.  She was in the NICU, hooked up to monitors.  She was being given antibiotics via IV and she was beautiful.  She had a dimple in her chin and her right cheek.  She was feisty, she kept kicking her blankets off her legs.  She also had the sweetest, tiniest little cry.  She sounded like a kitten.

She was finally released from Lutheran Hospital when she was eleven days old.  She came home on an apnea and heart monitor.  She came home and cried for the next six months.  She was finally diagnosed with reflux at four months old, at which point she only weighed ten pounds.  We started her on Zantac for the reflux and after two months on the medicine, she was like a new baby.  But she was still behind.

She was floppy.  At nine months old, when most babies are sitting up and even crawling, Olivia couldn’t even lift her head.  I asked her pediatrician for an MRI.  I wanted to rule out CP.  The MRI came back fine.  We were told she had a beautiful brain.

I kept looking because I knew something was wrong.  Our doctor was great at diagnosing ear infection or strep but he wasn’t very proactive about helping me with Olivia.  He kept telling me she was just delayed, that she’d catch up.

I found a syndrome when she was about ten months old.  It fit so many of her symptoms.  She had low muscle tone, she had a cat cry at birth, she was globally delayed.  I mentioned this syndrome to her pediatrician and he told me there was no way she had this syndrome because she was too beautiful.  Yes.  He said that.

When Olivia was a year old, I gave up on finding a diagnosis for her delays and asked for a referral to First Steps, Indiana’s early intervention program.  Olivia qualified for physical therapy, occupational therapy, speech therapy and developmental therapy.

She finally started crawling at 17 months.  But at her two year check up with her regular pediatrician, I asked for a referral to Riley Hospital for Children.  Olivia still wasn’t walking and I worried something was really wrong with her.

We met with Dr. Stanley, a developmental pediatrician at Riley when Olivia was two years and three months old.  This doctor was amazing.  She listened to me.  She checked my little girl and agreed, “There is something wrong with this baby.”

When I mentioned that syndrome I’d found way back when Olivia was ten months old, Dr. Stanley said, “I doubt she has it.  She doesn’t have the typical facial features.  But let’s test her just to rule it out.”

Two weeks later, the results were in.  Olivia has 5p- syndrome, also known as Cri du Chat.  This was the syndrome I’d found and suggested to her regular pediatrician, the one that Olivia is ‘too pretty’ to have.

She’s missing part of her fifth chromosome.  She’s still got low muscle tone but she does gymnastics.  She’s got some processing delays but she’s doing amazingly well.  We met with Dr. Stanley just this past May and got a clean bill of health.  Olivia has had scans of her heart, her kidneys and her brain.  She’s perfect.  She’s doing what we all do just with less DNA.  She amazes me every single day and I thank Dr. Stanley and Riley hospital for Children for saving my sanity.  They treated me and Olivia like we mattered, like we were more than just a patient number.

I thank all of you for all that you do to raise money for this amazing organization and for making these kids feel so special each time you encounter them.