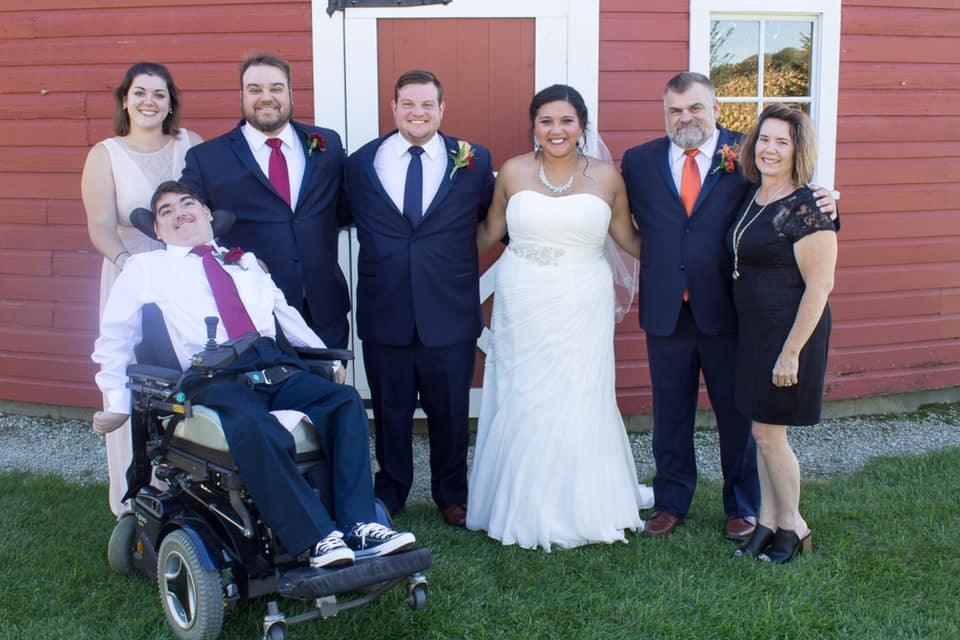 Michael is now 19 years old, but he has been impacted by Riley since he was just two months old. Since Michael has cerebral palsy, him and his family have had to take on some extra tasks and obstacles that most families do not have to face. With the incredible care at Riley, however, the Holcombe’s believe they have a great support system and a medical team who truly listens and cares about the family’s needs. Michael is a Colts and Jacksonville Jaguars fan, and he likes painting, going to police shows, and hanging out with his dogs. Here is his story as told by his parents:

Our Riley Story started in January 2000, as Michael turned 2 months old. After being deeply involved with Riley for over 17 years, you can imagine that our Story is a vast one.  Michael has had six surgeries. His inpatient stays are too numerous to count. We would often boast that he has stayed on every floor and every wing of the hospital. Mom knew all the shortcuts to where we were going. We even knew where the best parent showers were before all the rooms were remodeled to include family facilities. He has stayed in each of the ICU units, one for over a month. He would visit to the ER, Physical, Speech and Occupational Therapies, Wheelchair Clinic, Infant Clinic then the Cerebral Palsy Clinic, Neurology, Orthopedics,, Urology,  Pulmonology, Dental and Ophthalmology. As you can imagine in those early years Riley became our second home.

God has blessed us with Michael’s improved health over the past few years.  But Riley still is our home away from home.  Our “Go To” place where we know Michael will get the best of care and that we as a family will be respected. Our philosophy from the very beginning regarding the medical field has been  “If you don’t play nice, you don’t play at all!”  We, Michael’s parents…and his brothers, make the rules and direct his care. The doctors understand that they are our vehicle to getting that care. At Riley, they believe that the family of a child in their care is the best and most important part of a child’s tract to wellness. The family knows the child. They know what will work best for that child. The doctors see the child only for a few minutes…even when they are inpatient. The doctors have just a small view of the child’s condition. It is the family that sees the child daily, knows the symptoms and knows what works best for the child and the rest of the family.

As a teaching hospital, Riley teaches their students to listen to the parents. Listen to their concerns and their opinions on the child’s treatment plan. This is unusual in the medical field, although a lot of children’s hospitals are taking Riley’s lead and are realizing it is important to include the family in their child’s medical plan.

You all know, I think by now, that Riley is one of the premier children’s hospitals in the country. This is something to be incredibly proud of. The care that children receive at Riley is second to none! We are so blessed in the fact that Riley is in our backyard! As a matter of fact, our family in Michigan has repeatedly asked us to move back home to be close to them but we have refuse to because Riley is only 40 minutes away from us now. Yes, there are a few fantastic children’s hospitals in Michigan but they are not RILEY!

Probably the most important part of our Riley experience is the way our family feels at Riley. We (all of us: Mom, Dad, brothers, and Michael) are at home at Riley. All employees at Riley strive to welcome families and patients and treat them with RESPECT and LOVE. Over the years, we have made many friends at Riley. We feel comfortable and at home. We can relax in the fact that Michael will get the best care possible and that we will be cared for in the process. Brian and Eric know that their brother has the best doctors for him and as a result have less anxiety. The boys have learned to be huge and powerful advocates for Michael as a result of the fact that the staff listens to their concerns.

Lastly, Michael knows that he will be cared for at Riley. We have had the need to go to other hospitals that were closer to home. Hospitals that, unfortunately, didn’t have the slightest idea how to care for him because they don’t usually care for kids with all of Michael’s complicated conditions. Michael knows the difference in a staff that is not confident in what they are providing him. He will be very agitated and express his frustration and fear. We have had to use these hospitals to stabilize him for the trip to Riley. Michael has been known to cry from the time he gets to the other hospitals and the entire ambulance ride. However, you can visibly see him relax as soon as we pull into the ambulance bay at Riley. He knows he is safe there. He knows he will get better there. He knows that Riley is his “home away from home”. That feeling is “Priceless!!”

Our entire family wants to thank each of you for your dedication and hard work to raise money to allow Riley to continue this quality of care for EVERY child that needs it. Riley doesn’t take government money (grants or subsidies) and your donations fill the gap between costs and what insurance pays. Your time, effort, and money is SO important to our family. We wouldn’t be where we are without YOU! Michael wouldn’t be the happy, loving, smiling young man that he is without YOU! For that we are eternally grateful!